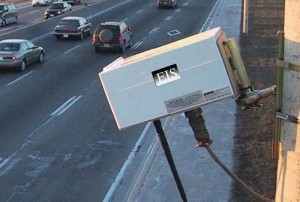 The RTMS (Remote Traffic Microwave Sensor) is a true RADAR (RAdio Detection And Ranging) device, specially designed for traffic sensing applications. It measures the distance to objects in the path of its microwave beam. The ranging capability allows the RTMS to detect stationary and moving vehicles in multiple detection zones. The RTMS microwave beam is approximately 40° high and 15° wide. Its range of 60m (200 feet) is divided into 32 range-slices, each 2m (7ft.) wide. When pointed onto a roadway, it projects an oval footprint, in which detection zones can be defined using the range slices. The RTMS has two mounting configurations and several operating modes.

SIDEFIRED configuration, mounted on a roadside pole, aimed perpendicular to the traffic lanes. Range-slices corresponding to the location of traffic lanes are defined as detection zones as part of the setup process. A maximum of 8 detection zones can be defined. Each detection zone may consist of one or more range slices. Its length is determined by the width of the beam’s footprint.

FORWARD-LOOKING configuration, RTMS is mounted on an overhead structure aimed parallel to the lane. In this configuration the sensor cannot discriminate between lanes and the aiming angle must be carefully adjusted to confine the footprint to a single lane.

Vehicle Detection
Use of long-wave microwave and ranging, enables accuracy in severe weather, strong vibrations and detection of vehicles completely occluded by other vehicles. Mounting can be relatively low.

The RTMS receives reflected signals from all surfaces within its beam – pavement, barriers, vehicles and trees. It maintains a background signal level from fixed objects in each range slice. Vehicles are detected when their reflected signal exceeds the background level in their range slice by a certain threshold level. If that range slice is part of a defined detection zone, its contact is closed during the detection time to indicate detection and internal counters are incremented.

The background level “capture” requires 30 seconds to fully settle during setup. It is continually adjusted during normal operation. As an example, signals from a stalled vehicle will be incorporated into the background after about 30 minutes and detection will cease (zone contact will open). However, when the vehicle is removed, the background level falls rapidly to the original level, resuming detection at full sensitivity within seconds.