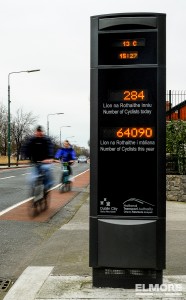 The Eco-Totem Sign displays the number of cyclists per day and year to date. Other information can be be displayed on the build-in variable message sign, such as; date, time, temperature rainfall, pollution, general information, etc.

The Eco-Totem Sign can be configured to have a display on one side or both sides. Where a single sided display is chosen the rear could be used for other applications such as a city map. Detection and counting of cyclists is by way of inductive loops.

The Cycle Totem Sign is an intelligent traffic management product designed to assist local authorities through:

Zelt Inductive Loop detection is the ideal sensor for permanent installation of bicycle detection and monitoring. It can distinguish bicycles in mixed traffic with great accuracy. The Zelt Induction Loop detector consists of 4 different versions :

An inductive loop is inserted 2 to 5 cm under the surface of the road or trail. Each time a bicycle goes over the loop, the system detects the electromagnetic signature of the wheels’ and registers a count. The loop is 1.5m (5ft) in length. More than one loop may be connected to the same logger.

Tubes are a perfect way of monitoring temporary bicycle traffic. It can distinguish bicycles from motorized vehicles at the same time giving greater accuracy for groups of bicycles on dedicated paths.

It is a Mobile Device ideal for temporary counting in urban areas, where two are laid over the road perpendicularly to the traffic flow with a distance of 30cm between the tubes. In green way areas one tube is laid over the cycle path. It is possible to use two tubes to detect the direction of the cyclists.

Ground preparation consists of drilling 6mm holes on the road or path for the nails and clamps that secure the system in place. Installation takes under 15 minutes to install the 4 clamps and two tubes. Speed/Sensitivity parameters are factory set at 35km/h and can be modified to 42km/h.